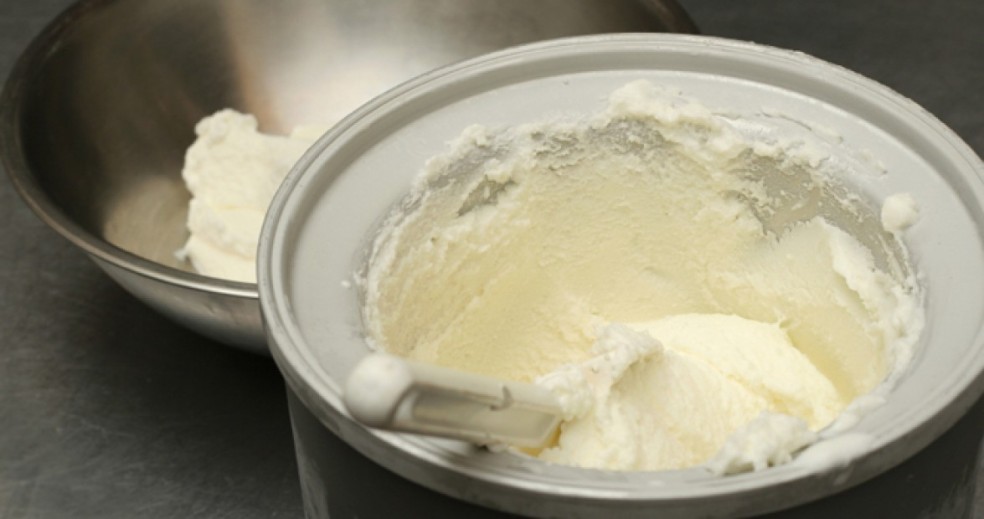 Let it be known, I am fanatically dedicated to ice-cream. To me there are few things in life as joyful as taking a walk with a friend on a summer’s eve and imbibing some well crafted frozen milk-fat (OK, it doesn’t necessarily even have to be all that well crafted, I like it all). Cass of course knows this, and bought me an ice-cream maker for Christmas (squeeee! I’ve always wanted one!), so I thought that tackling a WasteNot batch would be a great project for this past week.

It’s taken a little bit of wrangling, but our local milk hook-up has finally materialized, so I started the project off with a trip out to a farm to pick up some super legit cream.

Side-note: Yes, I’m aware of the inherent contradiction in burning enough fossil fuel to transport myself 32km in order to buy dairy in my own re-usable packaging. Weening ourselves off of reliance on fossil fuels is definitely a goal in the long term, but for now we’re focusing on tangible garbage creation. Eventually I envision a Tesla vehicle charging on a combination of solar and wind power (as well as a perpetual motion machine, scoff if you will!). But for now I simply embrace the contradiction of driving long distances to score local cream. It just means it’s a treat and not something I do every day. Right?

OK, so let me tell you about this cream. Holy geeze. It seriously looked like a vanilla milk shake. It wouldn’t even really pour, we had to spoon it from it’s original container into my 1.5L pickle jar, lest it glorp all over the counter. The heavy whipping cream you buy in the grocery store is 33% milk fat. This stuff had to be at least 60%. It was amazing. Not only that, you could actually taste the grass that the cow was eating. You could almost taste the cow itself, haha XD

When I got home I created a maple goop (a la butterscotch ripple) out of some  syrup that we were gifted for Christmas, and some brown sugar boiled together. The syrup came in a tin can, having been given by family members that perhaps weren’t aware of the WasteNot project yet, so we re-purposed that as an incense burner once it was empty. The brown sugar we still had on hand from before the project (like I say we don’t use a tonne of it), but you can get it at Bulk Barn no problem.

I envisioned pouring the liquid sugar goop into the ice cream maker once the cream was almost fully set, and it swirling majestically through the concoction to form a perfect toffee-like strata in the substrate of frozen milk-fat. Things didn’t pan out that way

Unfortunately, the syrup goop was still slightly warm when I poured it into the ice-cream maker, and it instantly melted the cream and dissolved into the resulting liquid. The goop that didn’t dissolve promptly sank to the bottom and we were left to serve a strange buttery maple syrup slop to our house full of guests.

They all said it was good.

Dejected, I scooped the remainder of the failed experiment into a lidded glass bowl and stuck it into the freezer where I would never have to look at it again.

The next morning, to my surprise it had re-set and was actually very ice-cream-ish! Of course the syrup goop was still sitting on the bottom and the cream was a little crystallized, but all in all for only my second attempt it was pretty damned palatable… Aside from being so rich I couldn’t finish an entire bowl!

OK, that’s not true I finished a  bowl. OK, OK, two bowls. GAH! Allright! I made myself sick on it OK? I could feel the fat oozing out of my pours and I mostly loved it!

What have we learned?

Perhaps that one need not necessarily sacrifice the finer things in Life in order to live in accordance with one’s deepest values?

Perhaps that a seeming failure can rise from the ashes and triumph against all odds?

Almost certainly that farm cream should be cut with milk before being made into ice-cream if you don’t want your liver to shut down due to egregious fat intake.